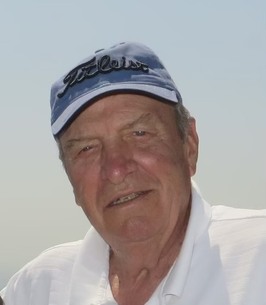 “Spence” to his friends, was more than a man, in certain circles and specific locations he was truly a legend. Spence passed away on June 5th, 2022. Ten months and one day after losing Gay, his wife of 59 years. To many the words “Gay & Spence” were synonymous with each other, their joint laughter, (her cackle and his bellow) were the soundtrack for many a memorable night.
Spence loved cold beer, John Wayne, the daily crossword, making soups on Sunday, Jack Bennie and the Chicago Bears. Not necessarily in that order. He hated brussel-sprouts, hypocrites, having to leave a good time, schedules and missing a three-foot putt. Not necessarily in that order.
As kids (and sometimes as adults) we were often roused to the sounds of an impromptu late-night after-party, keeping a good-time going was one of Spence’s true-life skills. Music from The Band, The Eagles or Bob Seger would fill the house at 2am, but if you dare leave your room to complain of the volume, you only found yourself being recruited as DJ until the wee hours of the morning.
Spence was a master storyteller, his tales of yore have entertained too many of his friends to mention here, and too many more anonymous folks who were lucky enough to wander into one of Spence’s haunts (Gray’s Lakehouse, Cagney’s, The Rosemere Inn or Bayfield’s Albion Hotel to name a few) only to be regaled by Spence’s ability to talk on a variety of subjects. He was unapologetically blunt, always informed and usually entertaining, time flew by when in Spence’s company. At least 50% of everything Spence said was 100% true, what you didn’t know was which 50%. Every good story needs a little enhancement.
John Wayne, Gayle Sayers, Ronnie Hawkins& Walter Payton were some of his idols and he was a hero to his three kids Kelly, Brad & Kevin. We can still picture him on a Bayfield cottage weekend, making dinner, wine in his hand, tea-towel over his shoulder loudly directing conversation, holding court while keeping everyone engaged. He excelled at a variety of sports (basketball, tennis &golf) cooking and trivia, he was the CEO of the famous Gaizee the Greek Football pool and was very proud of Reynolds Paper, the company he built from scratch.
When it came to fashion, Spence had his own sense of style, a different Walter Payton #34 jersey for every day of the week, with the occasional Blue-Jay or Montreal Expo jersey mixed in for a little variety. The ensemble usually topped off with a Reynolds Paper ball cap, you knew where Spence’s loyalties lied the second, he walked in the door.
In the end I think Spence was proud of the life he lived; it was the one he was best suited for. He was a self-made man, he found his own level of success with Gay, his family, friends and his business. Spence died while defending a small Mexican village from a ruthless band of outlaws. Or maybe not. Those who knew him, also know how he really knew how to end off a great story.