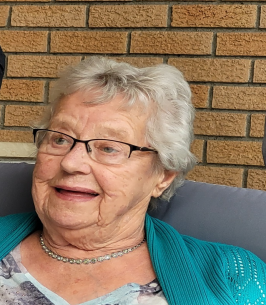 Jantje (Jenny) our mother, beppe, sister, Tante and friend passed away to be with Jesus shortly after her 92 nd birthday.
She was predeceased by her husband Albert (March 17, 2017).
She was the Mother of Nellie (John) Hoogendoorn, Wynne (John) Mosterd, Peter (Geraldine) Valkenburg, Alice (Gerald) Mosterd, Dorothy (Jerry) Kassies, John (Wilma)Valkenburg, Cris (John) Arends and Henry (Tina) Valkenburg. She was Beppe to 32 grandchildren, 77 great grandchildren and 3 great- great grandchildren.

Jenny was one of 11 children and is survived by her brothers Burt Greidanus, Leo Greidanus (Eileen), Don Greidanus (Greta), her sister Joanne Koetsier (Jack), her brothers in law Gary Haak, Neil Baakelar, and her sisters in law Mary Valkenburg, Janny (Jaap) Beumer along with many extended family members in Canada and the Netherlands.

She was born in Friesland, Holland. She was the oldest daughter and helped a lot around the house. In the last 5 years she told us many stories about growing up in Holland. She talked about childhood illnesses and the war years. Even with the many struggles during this time, her family did survive the 2nd World War. She immigrated to Canada in 1951with her parents, sisters and any siblings still left in Holland. The family moved to the Clinton area and she met Albert
Valkenburg while attending youth group at the Clinton Christian Reformed Church. They married in 1952 and they raised 8 children. Jenny enjoyed spending time with family and travelling the world with Albert. She was a professional seamstress and her home was always open to anyone who stopped by. She never said no to company and was able to feed anyone that was in the house at meal time. She also crocheted and made enough blankets and hats for all of us, our children and our grandchildren.

After dad died, mom could no longer live by herself. Her short term memory was gone and it was not safe for her to live alone. She then moved to Highview Residence in London Ont. During that time she started to tell us all these stories from her past, but couldn’t remember what happened yesterday. She never forgot who her children were and enjoyed our visits. She was more open about her faith, and often talked about heaven and Jesus. She still enjoyed her life, even though she did miss dad and was looking forward to being reunited with him. We enjoyed the many stories from the past, and it gave us a clearer picture of her life, and the many changes that she encountered along the way.
Mom was a faithful member of the Clinton Christian Reformed Church and later Talbot Street Christian Reformed Church in London. She was very proud of her children and grandchildren and we all knew it.

A special thanks to the staff at Highview Residence who looked after mom during her time there. Mom was well loved and cared for at Highview and we appreciate all that they did for her during her stay there.

Visitation will be held at the Clinton Christian Reformed Church, 243 Princess Street, East, Clinton on Wednesday November 16, 2022 from 6:00 to 8:00 p.m. where the Funeral Service will be held on Thursday, November 17, 2022 at 2:00 p.m. with refreshments to follow.
A private family interment has taken place at Clinton Cemetery, 40046 Hydro Line, Clinton Ontario.

As expressions of sympathy, donations in her name can be made to the Clinton Christian Reformed Church or the Huron Christian School, Clinton, Ontario.