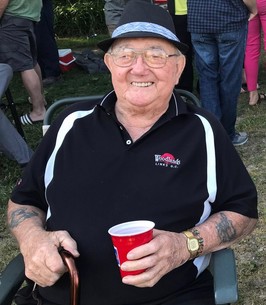 (David) Hugh Cook - passed away at Seaforth Hospital on November 20,
2021 with country music playing as he was finally released from the pain
of those damn flat feet. Hugh was born on July 15, 1935 in Wingham
where in high school he became a legend for perpetually winning quarters
from a future Member of Parliament in the classic "Heads I win, Tails
you lose" game. He will be forever loved and missed by his children,
Annette and Charley Walter, and Tom and Marsha Cook, who share his quick
wit as well as the onerous task of cleaning out his apartment. Hugh's
beloved grandchildren, Abi, Wes, and Madison, whose yearly school photos
line his fridge, will miss their Grandpa's relentless teasing and goofy
jokes. Welcoming him in heaven will be his wife Martha, his long-time
friend Marj Vere, and his grandson Sawyer who will soon learn every card
trick Papa knows. Hughie also leaves behind his best partner in cards
and scratch tickets, sister Dorothy Carter, as well as brother-in-law
Jim Carter, brother Larry Cook, and sister-in-law Gloria Cook. His
nieces, Barb, Judy, Chris and Sandy Carter have long been convinced that
he would die of circulation issues relating to his ghostly pale right
hand. Turns out the ashy pallor resulted from wearing his golf glove.
You got us, Rooster! Although Marsha believed his claim that he had
been a French Professor, Hughie was in fact a long-time employee of
Lavis Construction. He enjoyed playing golf, darts, and cards, horse
races, slot machines, lottery tickets, Timmy's coffee delivered by Tom,
dancing, singing to classic country, and burping loudly, followed by
"Excusez-moi s'il vous plait" in his impeccable French. His family will
say goodbye officially on Friday, November 26 at Falconer Funeral Home
in Clinton, followed by a private reception where they will eat enough
sugary desserts that even Hughie's insulin will spike. Memorial
donations may be made to Epilepsy Canada or a Royal Canadian Legion of
your choice. In his memory, enjoy a game of euchre with your family and
raise a rum and coke to toast the life of a well-loved man.